Western work-study student, Kylie Kelly, has spent a couple of years preparing collections from the Museum of Ontario Archaeology for long term storage at SA. Today, her guest blog discusses her experience with one of SA's newly acquired legacy collections and some of the 3D scanning she has been learning with artifacts from that collection.

Kylie Kelly is a work study student at the Museum of Ontario Archaeology and Sustainable Archaeology: Western. She is currently completing the last few weeks of her Bachelor’s degree in Classical and Medieval Studies at Western University. She is set to begin her Masters of Art History in the fall of 2016. Kylie became interested in working at SA during her time as an assistant curator at the Museum of Ontario Archaeology. She has been working simultaneously at both institutions since September of 2015.

In the summer of 2015 Sustainable Archaeology received a legacy collection that contained tens-of-thousands of artifacts from nearly every period of Canada’s archaeological past-- a private collection donated to SA by Dr. Brian Deller and family. The collection represents the life’s work, and passion of Merle Franklin.  Mr.Franklin, a mostly self-taught archaeologist, focused much of his research on the archaeology of the lower Grand River. He carefully documented the objects as well as the spots on which they were found. Following the acquisition of the legacy collection, SA’s work study students, including myself, were tasked with reading through the pages of documentation, and sorting through the corresponding objects in the collection.
Slowly, the hand-made artifact trays and boxes started to fill the shelves at SA. On Monday I could be working on a box that was full of historic glass trade beads, and the next day I could be working with ancient lithics. The expansive collection contains everything from Paleo-Indian projectile points, to historic railroad ties-- it truly has it all.  A few weeks ago I went to retrieve another box to sort through, and two artifacts caught my attention. The artifacts, a fork and a knife, were like nothing I had seen before (see figures 1 and 2, below). The fork had thin and stubby prongs, similar to classical depictions of Poseidon’s trident. The knife was equally as fascinating, it had an elongated ivory handle with multiple metal rivets. I had just started training with our white light scanners under the tutelage of Nelson Multari, SA’s 3D Technician, and Hillary Kiazyk, a part-time staff member at SA and student in Western’s Anthropology Department. I thought that the cutlery’s interesting shapes, reflective surfaces, and straight edges would be a great challenge for me to capture accurately.

As I began scanning the fork/knife duo I became more interested in their history, and how they had ended up in a collection in Southern Ontario. The knife had a clear makers mark stamped onto it that read “Joseph Rodgers E. Sons, Cutlers to Her Majesty” (Figure 2). Joseph Rodgers & Sons Cutlery Company was started in 1764 in Sheffield, England. It appears that the company began by making elaborate pocket knives; and that by 1821 they gained enough attention that King George IV appointed them “Cutlers of the Royal Family.”[i]   The company’s favour continued over the span of five successive monarchs: King George IV, William IV, Queen Victoria, Edward II, and George V. I discovered that the donated set was made between 1837 and 1901, during the Reign of Queen Victoria. One of the most famous knives created by the company was the Norfolk Knife; it was produced during the same time period as the set at SA. But unlike the rest of the artifacts in the donated collection, the context of this set of cutlery – where it originated and how it ended up in this collection -- is regretfully unknown, as these particular items were donated un-provenienced.

The 3D3 Systems (now LMI Technologies) structured light scanners at SA work by projecting a pattern of light onto the object. It then uses a rotating stage and cameras to capture the geometry of the projected lines in order to determine the shape and size of the surface of the object. An additional DSLR camera works to capture the texture, or color, of the artifact. The scanners are operated through Flexscan 3D 3.3 capture software, which allows the user to control the cameras, turntable, projector and model (for a detailed description of the white light scanning process at SA, see Ahmed et al. 2014). The nature of structured light scanning makes it difficult to capture reflective surfaces, as light projected onto the surface just bounces back off, leaving behind a fragmentary mesh, a problem I encountered repeatedly. Capturing a sharp edge is also challenging, as it requires scanning a mesh while utilizing lower cleanup settings in order to increase the amount of detail on the thin surfaces, thus there can be a lot of extra ‘noise’ captured in a scan that needs to be removed. To control the shine on the blade, I sprayed it with a non-corrosive powder to allow the white light to capture the surface, without bouncing off.  Due to the high learning curve associated with this technology, and this being my first independent scanning project, completing the preliminary scans of the knife took roughly 6 hours, and over 200 captures.  Finally, I was able to export the scan as a polygon (.ply) file to Geomagic Studio 2012 reconstruction software to refine the mesh and fill in any holes. I utilized a feature called mesh doctor that examines a 3D scan to detect and correct errors in mesh [ii].  Using this tool can result in a model that is “water tight”, meaning no holes are in the mesh. This water tight file is what we want to create if we are interested in producing a 3D print of a 3D scanned object. 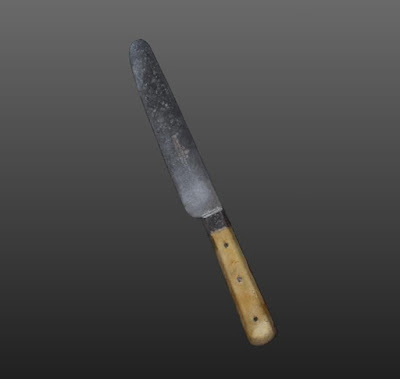 As I begin my Master’s degree in Art History next fall, I am constantly amazed with how relevant new technologies, like 3D scanning, are across numerous fields of study. Part of my research as an Art Historian looks at how artwork was constructed; by using 3D imaging I developed a new understanding of the craftsmanship and time it took to complete something that looks deceivingly simple.  After the scan was complete I noticed many quirks in the artifact that I would have otherwise missed with the naked eye. The edge of the blade increases in size by a fraction of a millimeter the closer you get to the base; the surface of the blade has a distinct pattern of pitting on only one side; the handle’s rust deposits run parallel to the small fractures in the ivory. It is fascinating to me, given its broader context that this special set of monarch-endorsed cutlery ended up in an archaeology collection in southern Ontario – and it makes me wonder more about who owned it, and why and how it came to be included in the Franklin/Deller Collection—the possibilities of discovery are endless at Sustainable Archaeology!