Guest Blog by Professor Andrew Nelson: On the Road with SA in the UK (Part 3, final installment)

Interested in how research projects and collaborations are established and executed? This is the final blog post in our series of three that has followed SA Research Associate Professor Andrew Nelson on a recent trip to the UK. Read Part 1 of the series here, and Part 2 here.

July 11th – Andrew took the opportunity to visit the Nikon Metrology Centre-of-Excellence in Tring. Tring is about 40 minutes by train north of London. This is where the microCT scanners - including our own! - are assembled, and where Nikon offers inspection services using their line of scanners. Andrew Ramsey, a CT Specialist at Nikon, showed Andrew N. around, and patiently tolerated a barrage of questions about the inner workings of the CT Pro reconstruction software.  Andrew R. was part of the team that scanned the amazing 'mechanism' from the Antikythera shipwreck - and has lots of experience scanning interesting things! 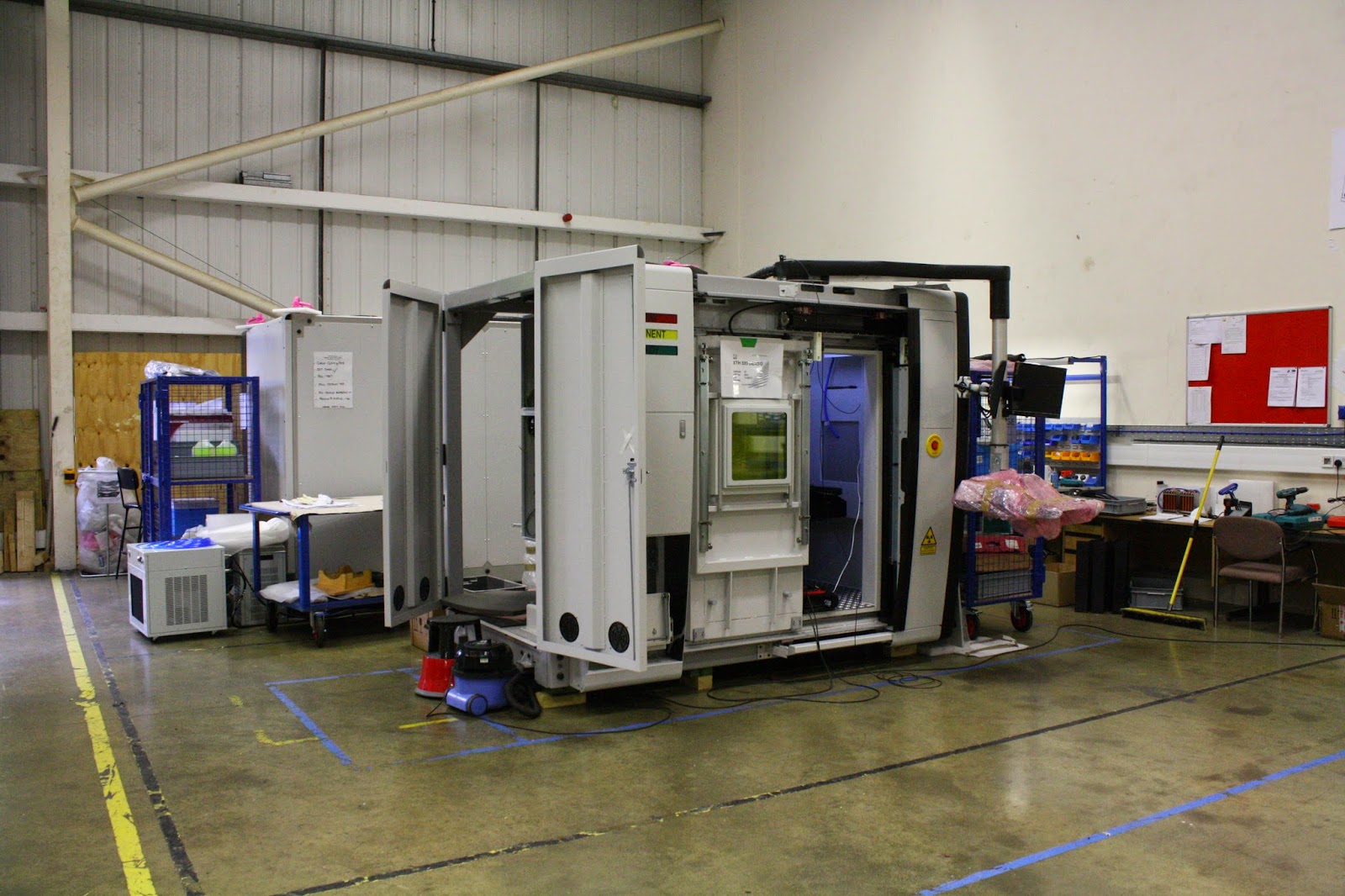 July 12th – Andrew visited the incredible block-buster exhibit at the British Museum entitled “Ancient lives:new discoveries”, featuring 8 Egyptian mummies [Andrew being a mummy expert himself - Ed.].  The exhibit features CT scans and detailed examinations of each individual, highlighting the story of their lives and how they were treated in death. Many of the exhibits included the ability for the visitor to interact with the scans – either rotating the views, cutting through the mummy or otherwise highlighting specific features. In many ways the exhibit was quite simple, but the visitors were enthralled.  This might be an interesting way to exhibit the scans of the prayer beads at the AGO!

July 14th – Scan day.  Andrew linked up with Annie Kemkaran-Smith, to scan two objects from the Wernher Collection at Ranger’s House Museum in Greenwich. Annie is the Curator (Art Collections) of the National Collections Group with English Heritage, London. As such, she is the collections curator for Down House (Darwin’s home), Eltham Palace and Ranger’s House.

The objects were a small prayer bead and a miniature boxwood coffin – a memento mori (see an example of a very similar coffin at the Metropolitan Museum in New York, here).  The scans are pretty amazing – particularly the coffin!  It will take a lot of work with the analytical software to segment it into separate elements. We will demonstrate this work in a future blog post.

That was it for the bead and CT related work on this trip.  It was a pretty eventful few days!  We’ve got some more scanning planned at home in London, Ontario and the triptych with the Detroit Institute of the Arts to do – so lots more to come. Watch this space!


Thanks, Andrew, for sharing your adventures with us. It's been interesting to see where our microCT scanner was built, and the sorts of work researchers in the UK are doing with similar equipment. We are certain the trip has inspired research for both you and future students in the Anthropology Department at Western. We look forward to seeing your research and collaborations blossom here at SA: Western, and we're thrilled to be a part of this story!

Guest Blog by Professor Andrew Nelson: On the Road with SA in the UK (Part 2)

Interested in how research projects and collaborations are established and executed? This blog post continues the adventures of  SA Research Associate Professor Andrew Nelson, as he gives us a  behind-the-scenes look at his new collaborative project with the Art Gallery of Ontario. Read Part 1 of the series here.


July 8th – Lisa Ellis, Sasha Suda (both of the AGO) and myself (Western University) visit the Natural History Museum in London, England to see their microCT scanning facility.  They have a Nikon XT225 just like the one at SA: Western – perfect for this project, as the unit and the software here will be the same that I use at home, ensuring comparability of the scans.  Lisa and Andrew, along with Andrew’s long time radiography colleague, Jerry Conlogue, met up at the NHM.

There we were met by Dan Sykes, Assistant Micro-CT Lab Manager and Micro-CT Specialist at the Imaging and Analysis Centre (IAC). This is an amazing operation – a lab full of humming computers with folks creating amazing images on their computer screens – everything from bee brains to meteorites to bones.

Andrew returned here later in July to scan two pieces from the Wernher Collection at Ranger’s House museum in Greenwich (see 3rd blog installment).  One piece is a prayer bead, and the other is a small boxwood coffin that is carved in a similar manner as the beads.  That should be fascinating… stay tuned.

July 9th – Lisa and Sasha head back to Canada.  There’s nothing going on that’s relevant to the bead project – but Andrew did visit the Hunterian Museum.  This is an amazing collection of anatomical specimens – both human and animal, as well as the skeleton of Charles Byrne, the Irish Giant.  Fascinating stuff – lots here that could be microCT scanned! (Byrne’s skull has been scanned at the Natural History Museum).


Next time, Andrew visits the Nikon Metrology Centre-of-Excellence in Tring - where our microCT scanner was born - stay tuned to Part 3 of our blog series.
Posted by Sustainable Archaeology at Western University No comments:

Guest Blog by Professor Andrew Nelson: On the Road with SA in the UK (Part 1)

Interested in how research projects and collaborations are established and executed? Be sure to follow the next few blog posts contributed by Professor Andrew Nelson, SA Research Associate. Andrew shares the details of a research project still in its infancy.

Sustainable Archaeology (SA) and Art Gallery of Ontario (AGO) are collaborating on an research project focused on late Medieval/early Renaissance prayer beads in the Thomson Collection at the AGO.  These beads are devotional objects carved from boxwood that date to the first-half of the 16th century. See Codart Ezine and the AGO blog Art Matters (both previously featured in this blog) for some of the work that’s already been done!  Curators and researchers have identified about 135 of these beads in collections in Europe and North America.

This projects focuses on the cultural context of these devotional objects, their collection history as well as technical aspects of their construction… that’s where the SA comes in.  In 2012, the AGO first visited SA: Western to undertake microCT scans of 3 prayer beads in the Thomson Collection (you can go back to that blog post, here).  We confirmed that the beads are very complex constructions, with major and minor components – they are works of technical virtuosity (see the AGO's video clip of one of the scanned prayer beads here). Since those first scans, we have now scanned all the beads in the AGO’s collection, three additional beads from a private collection, and we’re now branching out to do more!

… and that brings us to London, UK.


The Team – Lisa Ellis is a Conservator of Sculpture and Decorative Arts at Art Gallery of Ontario.  Sasha Suda is the Associate Curator of European Art at the AGO.

Lisa and Sasha were in London for the GothicIvories: Content and Context conference, 5-6 July 2014.  Andrew was there on “vacation”.  We coordinated our time to work on the bead project together.

July 6th – Andrew landed in London, joining Lisa and Sasha at a gallery opening at Sam Fogg’s Gallery of Medieval Art, Islamicand Indian Art - a heady mix of collectors and academics, mixing over champagne and art.  Contacts were made for Monday.

July 7th - Lisa and Andrew met up at the British Museum to peruse the galleries. In particular we visited the Waddesdon Bequest collection, an amazing collection of objects amassed by Baron Ferdinand de Rothschild and bequeathed to the British Museum.  The highlight of course, from our perspective, was the boxwood miniature tabernacle - this is a prayer bead in a stand… with an elaborately carved base and a top that opens up like petals.

Later, we hooked up with Sasha and visited with Dr. Dora Thornton, Curator of Renaissance Europe at the British Museum, as well as staff members Gina and Ellie.  The British Museum has also scanned the bead from the tabernacle mentioned above – and we talked a lot about the analysis of the scans, and potential for collaboration – a very positive meeting!!

Dr. Thornton took us down to a workroom in the bowels of the museum to check out this amazing boxwood triptychaltar-piece. It is carved in a very similar manner to the prayer beads – the craftsmanship is amazing! The image at the top is of course the crucifixion – the figures in the round part of the base represent the apostles at the last supper (Judas sitting alone in front).  This piece would be great to scan – but might be too delicate to transport to a scanner.  However, Andrew is going to link up with the Detroit Institute of the Arts in August to scan a similar triptych in collaboration with the Nikon Metrology office in Michigan (the company that built our mCT scanner) – stay tuned…

Having taken our leave of the British Museum, we headed down the Victoria Line to the Victoria and Albert Museum to meet with Glyn Davies, a curator at the V&A.  There we discussed three prayer beads in their collection:
St John the Evangelist in Distress
St. Jerome in his study and St. Catherine of Alexandria:
and Scenes from the Life of Jerome

Sounds like we’ve got a return scanning trip to plan soon!!!!