Our Partner Institution, McMaster University, has been busy with the renovations at McMaster Innovation Park. Here's a glimpse of one of the new analytical labs. Like Western, McMaster will have the capacity to store archaeological collections as well; the facility is similarly equipped with Spacesaver shelving, RFID tag monitoring by OCR and custom green Enviropack boxes. Analytical research will focus on materials analysis, such as chemical testing and thin sectioning. These methods will help to determine the source, structure, date and composition of archaeological materials.
Posted by Sustainable Archaeology at Western University No comments:

Geophysical technicians Ed Eastaugh and Jean-François Millare of Western University have been on site at Fort Erie with Sustainable Archaeology's magnetic gradiometer and resistivity meter, searching for evidence of the War of 1812. The geophysical work is part of the field school excavation at the historic fort site, led by Dr. John Triggs of Wilfrid Laurier University. The excavation, which began May 14th and will conclude this week, has been focusing on the American defensive positions during the battle fought at the site in 1814.

To read more about the excavation, check out the WLU media release or the Toronto Star article featuring work at the site. 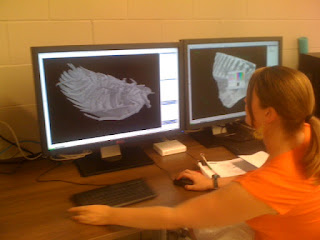 Our Lab Tech Zoe has been putting the MicroCT through its paces, performing proof of concept tests on different types of objects to determine scanning protocols for the Ancient Images Lab. Here, she works on the reconstruction computer - on the left screen is a scan of a pillbug that in actual size is about as big as a human finger nail. This test in particular really demonstrated to us the power of the MicroCT, as we were able to view all aspects of the tiny creature's body in great detail, from the little hair-like protrusions on its leg, to the many octagonal shapes that make up its eyes.

On the left is a screenshot from the reconstruction computer that demonstrates the multiple views of a piece of scanned pottery. On the right is a screenshot of a scanned polar bear vertebrae. When viewing these scans in the actual software, the user would be able to rotate the object on screen, and would be able to manipulate the image to see an "inside-out" view through the object. 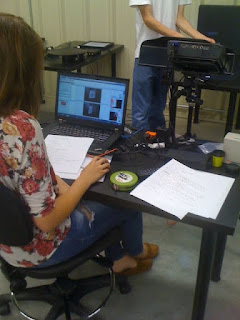 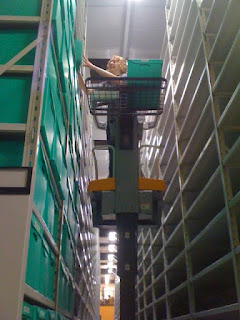 We've been starting to move some collections into the facility. Here Kira carefully places our standard size green Enviropack boxes that hold collections from the Museum of Ontario Archaeology (next door) onto the shelves with the assistance of the Work Assist Vehicle (WAVE). You can see why we limit the weight of boxes to 45 lbs or less! Not only does the bottom start to sag when packed materials get too heavy, it can be difficult to maneuver a heavy box from the WAVE onto the shelf at such a height. Shelves in the Western facility reach 16 feet or just under 5 meters in height. At capacity, this facility will house over 54,000 of these boxes.
Posted by Sustainable Archaeology at Western University No comments: