Yes the Cat: A Study of Mummification

The "Yes the Cat" project is an interdisciplinary investigation led by Dr. Andrew Nelson of the Department of Anthropology at Western University. The project is an ongoing study of the effects of mummification on different tissues of the body as demonstrated by the individual of interest - a domestic house cat named Yes.

Yes was mummified at the request of his owner, after dying of natural causes eight years ago. Since the time of the mummification, he has been studied using MR and clinical CT imaging in order to see beneath the exterior wrappings, to examine how the remains have changed over time.

Most recently, Yes the Cat was scanned using Sustainable Archaeology's microCT scanner. The microCT provides an additional means to non-destructively examine Yes the Cat's "afterlife", without removing any of the wrappings or disturbing the remains below. In the video below, Yes's skeleton was isolated from the layers of wrappings, which are digitally removed, allowing for the examination of the skeletal remains.

By isolating different densities, the researchers were also able to examine the condition of remaining internal organs, such as the heart, seen in red in the image below. 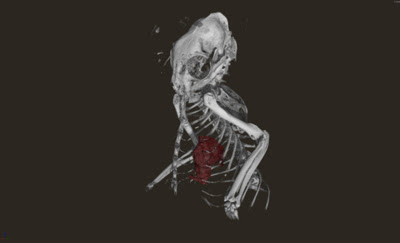 This cross-section, produced using the SA microCT's software, provides a more complete picture of Yes - through the wrappings down to the skeleton, also revealing what remains of the brain, heart and tongue. 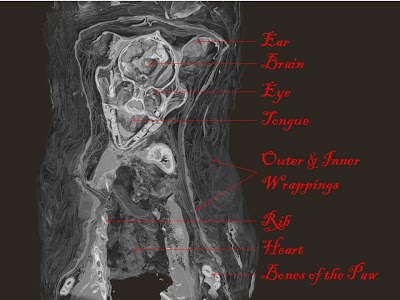 Through digital imaging, Yes the Cat will continue to be a source of information about the effects of mummification for years to come, contributing broadly to our understanding of mummification and how mummified remains change over time. These findings can be applied to other cases of mummification, including both humans and other animals.

The Yes the Cat project will be presented at the upcoming Annual Meeting of the Canadian Association for Physical Anthropology at the University of Victoria in Victoria, B.C., on November 13th.

Guest Blog #3: From the Field to the Lab: Artifacts and “Microfacts” from the McMaster Archaeological Field School

Our third guest blog features the Centre for Sustainable Archaeology at McMaster University in Hamilton, ON. This post was written by Jennifer Walton, a third year anthropology student at McMaster, and Research Assistant at Sustainable Archaeology. The blog features her experience using the Centre's materials analysis equipment to examine "microfacts" recovered from the McMaster field school at the Nursery Site (AhGx-8) this past spring.

From the Field to the Lab: Artifacts and “Microfacts” from the McMaster Archaeological Field School
By:  Jennifer Walton, Honours Anthropology (III), Research Assistant, Centre for Sustainable Archaeology at McMaster Innovation Park

This spring I had the opportunity to attend the McMaster University archaeological field school held at the Nursery Site (AhGx-8) in Cootes Paradise within the Royal Botanical Gardens. The site dates from approximately 3000 years ago and was also used as a farmstead during the historic era.  During the course of the excavation, we were responsible for conducting two different types of sub-surface surveys to find the boundaries of the site and to evaluate the differences between traditional test-pitting used in cultural resource management, and a finer resolution method.  Each student took standard test-pit samples using a shovel alongside bucket-auger samples to analyze the variability in field survey methods.  Understanding the variability in the recovery of artifacts using different techniques is important because of the history of plowing at the site, and the fragmented nature of the artifacts we recovered.  Test-pit sediment was screened in the field, following the guidelines set by the Ministry of Culture. The auger samples were later wet-screened at the Centre for Sustainable Archaeology at McMaster Innovation Park.

Auger sampling has been used at the Nursery Site since the 2010 field school. Since the site has been a plough zone for over 50 years, the Nursery Site had experienced heavy disturbances, resulting in the fragmentation of many of the artifacts. Auger sampling is useful in this context because it retains the entire sediment sample and the finer screening method allows for the collection of smaller artifacts, often resulting in more artifacts per litre of soil compared to traditional test pitting.  The boundaries of a site should show a decrease in artifact density as one moves away from the central area of the site, therefore augering is potentially a more effective way of finding the outer limits of the activity area, especially in highly disturbed areas.

The bucket-auger sampling method uses a hand held device (7.5cm bucket-auger) that is twisted into the ground below the sub-soil to extract an intact sediment sample. All of the sediment is retained, and once in the Sustainable Archaeology lab, each auger sample is washed through 2mm mesh, dried, and the sediment fraction >2mm is examined beneath a stereomicroscope. The sediment from the test pits, in contrast, is screened in the field through 1/8 inch mesh and artifacts are picked in the field. It is the difference in these screening methods, in association with the methods used to identify artifacts that accounts for the variance in artifact recovery.


In the lab the auger samples were wet-screened, and the remaining fraction was viewed under a Zeiss V8 microscope at 10 X magnification to distinguish if the materials were, in fact “micro” artifacts.  Many research questions can be answered from the analysis of these samples, such as artifact densities and types of artifacts found in specific areas of the site or throughout the site as a whole.  Site boundaries may also be estimated and further insight into disturbance levels may be gained. The results from the auger samples have shown new insights into the artifact densities as well as the extreme fragmentation of the artifacts, especially calcined bone, ceramics and tertiary debitage.  Using this survey method and the resources at the Centre for Sustainable Archaeology has allowed us to identify new areas of the site which can be excavated in future field seasons.

It's been a while since we've had a construction or building related post to share! Today we received our official signage, including room numbers and designations, as well as a number of exterior signs. It's one of those finishing touches that makes the building really feel polished and functional. 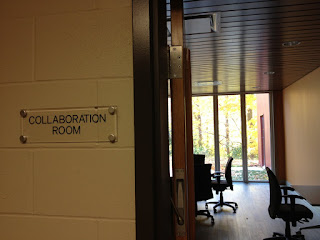 Notes from the SA

We'd like to take this opportunity to share our newest endeavour:  Notes from the SA: The Sustainable Archaeology Newsletter. Our goal is to connect with fellow researchers and with students both in the archaeological community, and on campus at Western. If you have ideas for content, events, lectures, conferences or grants you'd like to share, contact Kira Westby at kwestby2@uwo.ca

Guest Blog #2: Animating the Past


Animating the Past
By Colin Creamer

As animators we come from an artistic and tech-savvy background and look at the world much differently than archaeologists might. We had very little knowledge of the world of archaeology. When we discovered we could come all the way down to London from Loyalist College in Belleville, to work at a museum, it wasn’t so much the history and knowledge of the past that caught our attention, but more so the opportunity to get hands-on experience with new technologies. At Loyalist College this past year, we were just beginning to get into some of the freeware scanning solutions such as Autodesk’s 123D Catch, an image driven 3D reconstruction platform. It was really cool to see real-life objects come into digital existence. However with this platform, being a beta, you got whatever it gave you and had no real control over the results. Sometimes it worked, but most of the time you would get some deformity that resembles nothing of the original object being scanned. This made the idea of working with the-real-deal industrial grade scanners all the more appealing.

After jumping the fence and zipping down to London, we started our work term with the Sustainable Archaeology Animation Unit (SAAU). May 7th 2012 was our first day. We got the tour of the facility, and were in awe as we saw the massive mechanical aisles of the artifact repository sliding across the floor. To think, these shelving units would soon be the home of hundreds of thousands of artifacts in the near future. We would be a part of that process, scanning a variety of artifacts for digital archiving. Unfortunately… there was one problem. Things were only just starting to come together. The scanners would not be arriving for at least another three weeks. So now there’s a room full of animators, but nothing to do. We needed a project to keep us occupied and seeing as we are animators after all, the idea sprouted to create a recreation animation of the Lawson Village site, a 16th century Neutral Iroquoian site, located just outside the facility, next door at the Museum of Ontario Archaeology.


The animation of the village would give an understanding to interested onlookers. However seeing as none of us animators are archaeologists; in order to pursue this new project, we needed to develop an understanding of what archaeology is and learn as much as we could about the Lawson site. The animation had to appeal to people that have little or no understanding of archaeological findings. Also on the other hand, each archaeologist has their own interpretation of what a village site would look like, and we had to show something that was accurate. Throughout the term we were learning new things little by little. At first, we went out to do some concept art in the site, and draw anything and everything we saw. We also obtained archaeological maps which illustrated the shape of the land as well as features that showed exactly where the long houses and palisade posts resided. This allowed us to build an accurate representation of the site layout. We also went on a field trip to the Ska-Nah-Doht Village and Museum site, to get a better general understanding of how things were thought to have been at the time that the Lawson Site was occupied. All of this research informed how we designed and created the animation.


Having started with no insight or real knowledge of archaeology, working at the museum on related projects has bridged the gap between two, normally unrelated fields. The experience is continually exposing us to the terminologies and ways of archaeology. This unique mix has allowed us to successfully achieve projects such as the Lawson animation, that both people from inside and out of archaeology can appreciate and enjoy.
Posted by Sustainable Archaeology at Western University No comments:

Autumn at the Lawson site 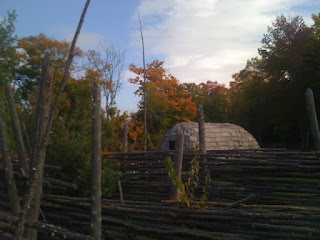 It's a beautiful fall day out in the reconstructed late Woodland village beside SA Western. Inside, the microCT is busy scanning primate skulls and plans for the database are taking shape up in the Mezzanine. This month we anticipate researchers on site to utilize our equipment for analyzing coral growth and trauma caused by hanging. We will also receive our second shipment of green boxes. We expect to be accepting collections into the facility by late spring/early summer. If you require any boxes for collections that you anticipate storing at SA Western, please contact SA Operations: rhonda.bathurst@uwo.ca
Posted by Sustainable Archaeology at Western University No comments: