Micro-CT Scanning by the Art Gallery of Ontario

In the summer of 2012, Sustainable Archaeology worked with Art Gallery of Ontario (AGO) conservator Lisa Ellis and curator Sasha Suda to micro-CT scan 16th century prayer beads, in order to understand how these complex and intricately carved beads were constructed. Their work is the subject of  recent AGO Art Matters blog, titled "Conservation Notes: A very fine resolution". The project was also featured in the Spring 2013 CODART e-zine. The video below (posted on the AGO's Youtube channel) shows a surface rendered model of one of the prayer beads.

Our fifth guest post was written by Julilla Paul, a third year Honours Anthropology student at McMaster University. She writes about her volunteer work at Sustainable Archaeology: McMaster, focusing on the processing, re-bagging, and analysis of coffin hardware from the St. Thomas Anglican Cemetery (Belleville, Ontario).

I discovered that Sustainable Archaeology at McMaster Innovation Park was going to open in this past summer, and the day I found out was the day I sent in an e-mail to ask if they were accepting student volunteers. The first thing that struck me as I entered the facility was its size. The facility is composed of a wet for processing samples and dry lab for high resolution microscopy as well as a massive storage area for archaeological collections. The storage area is a vast space lined with waiting shelves, each poised in anticipation of the arrival of archaeological material from across the province. I had spent part of the summer on an archaeological field school in Italy over the summer and I had even volunteered in a small anthropology lab before, however neither of these experiences prepared me for what awaited me in this new space. This lab was ripe with new opportunities to learn how materials from the field are processed, stored, and analyzed. Both the wet and dry labs sport an open layout, bright lights, and a general air of fresh excitement, an eagerness for what is to come. At least, that is how it is seen through the eyes of a starry-eyed student volunteer. After my inaugural tour of the facility, I was put to work building the standardized archival boxes.

Building boxes at the Sustainable Archaeology lab is a rite of passage and fulfills the practical necessity of furnishing its attached storage space. It acts as an introduction to the rhythms of the lab as well as its people and spaces. My first few weeks were spent building boxes to fill the shelves. However, short diversions from this introductory task were soon interspersed in my sessions. At first, I was introduced to the task of re-bagging artifacts for storage. All of the material coming into the facility must be re-bagged in archival grade, acid free bags and labelled based on a standardized system. My work began with the coffin hardware from the St. Thomas Anglican Cemetery sorting the decorative metal handles, rivets and nails that remained from the burials.


St. Thomas Anglican Cemetery was located in Belleville, Ontario and was used from 1821-1874 (McKillop, 1995). A total of 579 graves were excavated on the site in 1989 and yet it is estimated that this represents only 37% of the total number of graves present in the cemetery (McKillop, 1995). Coffin hardware on the site shows a high degree variability in style and form. While some of it was produced in the area, mass-produced coffin hardware emerged in the 19th century when the cemetery was still in use (McKillop, 1995).


Currently, we’re working on a pilot project using XRF to test the variability in the quality of metals used in the manufacture of the coffin hardware. This project captivated my attention because it added to my understanding of historic European burial practices and the process of understanding the archaeology of death. I have delved into the world of mortuary archaeology and what I see is fascinating. I am eager to see how the results of the analysis of coffin hardware compare to the previously conducted studies of the osteology of the individuals from this historic cemetery site.


Volunteering at a lab still in its infancy provides a multitude of opportunities for an interested student. I was introduced to a full spectrum of lab activities from building boxes to observing thin sectioning procedures. Other student research assistants and volunteers photograph artifacts, drill samples, and test standard operating procedures. These tasks have application both in research activities and the day to day needs of a lab. At Sustainable Archaeology, I’ve had the opportunity to work closely with other student research assistants and engage in areas of research that relate to my academic interests. In this vibrant atmosphere, I still leave the lab each day with the same fervent excitement that I brought with me on my tour five months ago. 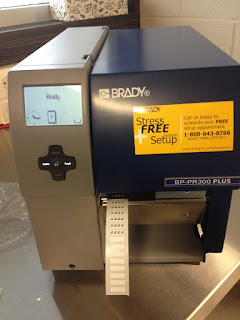 Our label printers have arrived and we are now able to print off artifact catalogue numbers as tiny 3.5x3.5mm DM (data matrix) codes. The codes are printed using a thermal transfer printer on custom die-cut labels made of archival-quality polypropylene. The labels encoded with the artifact's catalogue number will be affixed to the surface of the artifact itself using Paraloid B-72, an acrylic resin. As with traditional artifact labeling methods, the acrylic resin will be applied both under and over the DM code, to both protect the surface of the artifact, and to affix the code to the artifact.

The system that Sustainable Archaeology will use for assigning and coding artifacts with DM codes has been adapted from work by Spanish archaeologists at the Centre for the Studies of Archaeological and Prehistoric Heritage at the Universitat Autònoma de Barcelona (UAB). Using DM codes, the archaeologists at UAB are able to tag and identify even tiny artifacts without having to write directly on the artifact surface.